'The Muppets' available in Blu Ray and DVD 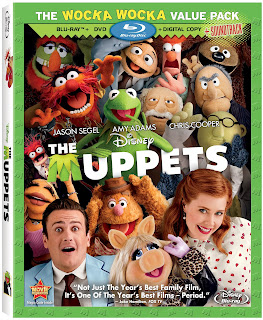 Today on March 20th, THE MUPPETS releases on Blu-ray & DVD! Keep the laughs coming with brand-new bonus material that includes bloopers, a making-of featurette, deleted scenes, filmmaker audio commentary and more! Below is an arsenal of assets to help your coverage capture the Muppets' signature irreverent comedy and famous friendships.

Want to meet the crazy cast from the mega movie? Here you go…

Kermit explains: “I understand they considered other actors like George Clooney and Tom Hanks for the role of Kermit – but I won it in the end. When it comes to playing a short, green and amphibious guy, I’m still Hollywood’s go-to guy.”

Miss Piggy reveals: “This is the role I was born to play. Moi plays a high-powered, confident, charismatic, gorgeous, scene-stealing star who saves the day and wins her frog’s heart!”
JASON SEGEL PLAYS GARY

Jason Segel explains: “Gary is very naïve, sweet and innocent – and he’s very much in love with his girlfriend Mary. It’s been a dream come true to star in The Muppets!”
WALTER PLAYS WALTER

Chris Cooper explains: “Tex blames the Muppets for a terrible event that happened to him at his 10th birthday party. He is unable to laugh and has vowed to destroy the Muppets!”
RASHIDA JONES PLAYS VERONICA

Rashida Jones reveals: “I play a hard-nosed, stressed-out TV executive. I am the only person who gives the Muppets the chance to air their fundraising telethon – and I yell at Kermit a lot!”
The Muppets is Now Available with the Wocka Wocka Value Pack, which contains the movie on Blu-ray high-definition, DVD and Digital Copy (3 discs) plus adownload card for the film's soundtrack from Walt Disney Records!