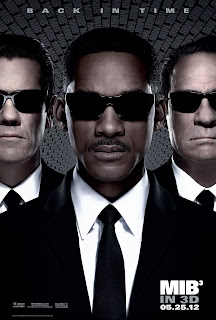 The theme song to the highly anticipated action adventure comedy Men in Black™ 3, titled “Back In Time,” has been written and recorded by RCA Records/Polo Grounds Music/Mr. 305 recording artist Pitbull, it was announced today by Lia Vollack, President of Worldwide Music for Sony Pictures. The song is now available as a digital single and released to radio on March 26th. Men in Black 3 will be released in 3D in theaters nationwide on May 25, 2012.

Barry Sonnenfeld directs the film. The film’s screenplay is written by Etan Cohen, based on the Malibu Comic by Lowell Cunningham. Walter F. Parkes and Laurie MacDonald produce, and Steven Spielberg and G. Mac Brown are the executive producers.
Posted by TVR at 6:11 AM