Friends With Kids in theaters

‘Friends with Kids’ is an ensemble comedy written, directed produced and performed by Jennifer Westfeldt (Kissing Jessica Stein, Ira & Abby). She and Adam Scott (Parks and Recreation, Stepbrothers) are the last two singles in the group of a close-knit circle of friends comprised of cast members Jon Hamm (who also co-produced), Kristen Wiig, Maya Rudolph and Chris ODowd.


Ben (Hamm) and Missy (Wiig) have a hot chemistry between them and they just can’t keep their hands off each other. Leslie (Rudolph) and Alex (O’Dowd) happily anticipate their first child. Julie Keller (Westfeldt) and Jason Fryman (Scott) have been friends since their school days and talk to each other at all hours of the day sharing the latest about their lives. Julie is not dating anyone at the time and Jason dates everyone, sharing intimate details with Julie. It is quite obvious in the film that Julie thinks of Jason as more than her buddy, but she respects where he is in his life with the dating game. He encourages her to get out more to find her man.


The relationship between the friends becomes a bit strained after children arrive and things change when they cannot meet in trendy bars or frequent dinners as before. Parenting is stressful and leads to marital conflict, but more for Ben and Missy who have become utterly different to each other as a couple with children. One dinner party practically turns into a disaster. Julie and Jason observe the effect that parenting has had on their friends' relationships. They wonder if there isn’t a better way to have children and keep their life, so they conduct an “experiment.”

The BFFs make a pact to have a child together, not marry, continue dating others, plus ensuring the child’s care is a priority. Everyone in the group questions their unconventional “experiment” and parents are baffled, yet they are happy for the new baby.


When it comes to dating other people, Jason meets Mary Jane (Megan Fox), a performing artist, in the park and Julie is introduced to Kurt (Edward Burns) among her social circle of lady friends. Things seem to be going well until Jason starts to see Kurt’s relationship grow with his son as the new couple seems to be growing closer.


Although this is a comedy with some humor in it, the drama that comes for each couple provides the actors with an opportunity to show the viewers their acting range. There is more to them than SNL, Parks and Recreation or ‘Bridesmaids.’ Westfeldt does a good job with the script for the change in character that Adam Scott performs very well.


‘Friends with Kids’ opened in Austin on March 9, 2012 when the SXSW Film Festival started and can possibly be overlooked, but I would recommend the 107 minute film. Just do not take the children to it during this Spring Break week, as it is rated R for sexual content and language. 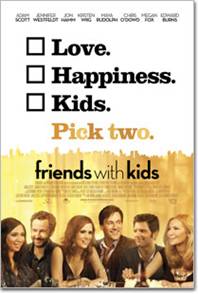