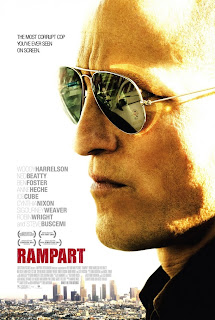 Oren Moverman director of ‘Rampart,’ co-wrote the crime/drama screenplay with James Ellroy. The premiere for the film was at the Toronto International Film Festival and then it screened at the Donostia-San Sebastian International Film Festival in Spain, both in September 2011. After a limited release in the USA earlier this month, ‘Rampart’ opens in Austin theaters on February 24th, 2012.

Set in 1999, Dave Brown (two-time Academy Award® nominee Woody Harrelson) is a cop assigned to the scandal rocked the LAPD’s Rampart division. The script does not focus on the specific scandal, but actions by this fictional character does bring more unwanted notoriety to who the LAPD. Brown is the son of a veteran cop, who apparently followed in his father’s footsteps in more ways than one. He has a confidante and mentor retired from the force, Hartshorn (Ned Beatty), who “takes care of him” and receives “appreciation” for his help in yellow envelopes. In their conversations, Hartshorn mentions the father and their history together.

There is not much new to describe the character Officer Dave Brown, as it is one we have often seen before in other stories about men like this: stubborn; refuse to take responsibility for their actions or to change; are in positions of authority and power yet knowingly abuse it and others around him. This character is also self-destructive-abusing tobacco, alcohol, pharmaceuticals with no prescription, sex and more. He is clueless as to how he destroyed two sister’s lives and the daughters they bore him.

Despite the suspicion for roughing up a suspect, murder and other charges, he drinks on the job and drives a patrol car. Do you wonder who and what else he knows? At the end of the film, does the viewer even care?

It is too bad so many excellent veteran, established and younger generation cast members are in one film with a script that can leave the viewer feeling left high and dry after investing 107 minutes watching it.

It is rated R by the MPAA for pervasive language, sexual content and some violence. What description is this, “some violence,” considering the repeated beatings, shootings, assaults and how Brown treats women?? There is plenty of violence in this film, not just “some.”