Bomba Estereo from Bogota Colombia at SXSW; Showcases at Red 7 Patio on March 14th and with Juanes at the ACL Moody Theater on March 16th 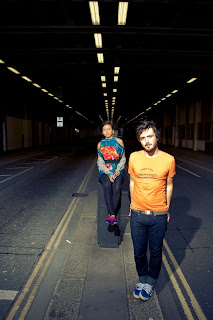 Bomba Estereo was created from the influence of late 90’s Colombian bands such as Sidestepper and Bloque de Búsqueda, which explored the fusion of folklore and tropical Colombian rhythms with contemporary sounds such as rock, electronic, and dub, among others.

Simon Mejia, founder and director of Bomba, had already experimented with this audible universe in a project lead by Héctor Buitrago from the band Los Aterciopelados, who in 2003 summoned Djs and producers to make a compilation that would fuse tropical music with electronic beats, from samples.

The result of this project, known as Entrecasa, was the album Colombiabeat, where Simon participated with the band A.M.770 and the song “Ritmika”, which was precisely selected as the promotional single.

After eight years of career, Bomba Estereo consolidated themselves as the independent band from Colombia with the most international projection.

In 2010 alone, the band performed at more than forty cites in Europe, Asia, Latin America and the U.S. and executed overall sixty performances that lead them to obtain the recognition for the “The Best Band in the World,” an award granted by the Culture Channel and Global Music MTV3.

These accomplishments are the result of the continuous work of Simon Mejia, who began his musical process back in 2003 with the band A.M. 770 – Simon Hernandez, Diego Cadavid, Javier Fonseca,- a project that he would later propel by himself and relaunch as Bomba Estereo in 2006 with their first album called “Vol. 1”

For this production, Simon searched for different lead singers seeking to include their collaborations in some of the songs.

He then met Liliana Saumet, fomer lead singer of Mister Gomes en Bombay, who participated in “Huepaje”, the promotional single of the record. Now with “Vol. 1” out, the sound of the single would shape the music of Bomba Estereo into a version originally sang by M.C. Al Roc from Asilo 38 over the track “Corinto”, which Li Saumet would later give the final touch transforming it into the famous hit “Fuego”.

When “Vol. 1” was finished, Simon flew to New York to the most well known event of Latin alternative music: the Latin Alternative Music Conference – LAMC-, where he signed a digital distribution deal of the album with the independent label, Nacional Records, whose main offices are located in Los Angeles, California and catalog includes enormously successful bands like Manu Chao, Los Aterciopelados, Los Amigos Invisibles, Los Fabulosos Cadilacs, and Maldita Vecindad, among others.

At the LAMC, Simon sealed online distribution deals of the record in portals such as Itunes and Amazon. Back in Bogota, Felipe Alvarez, label manager of Polen Records, raised an interest in the band and signed a label agreement with them, making Polen Records the official label for Bomba Estereo.

Simon continued working with Liliana in live performances and writing new material along with Diego Cadavid in percussion. This line up would later create the songs of the second album “Estalla” –Blow Up-.

“Blow Up”, produced by Simon Mejia and Julian Salazar in “El Muelle” studios of Polen Records, was launched in September of 2008 in Bogota, Colombia and has been successfully played all over the world ever since.

From Estalla! to Blow Up!

In Bomba Estereo’s second album, the band invited new musicians: Kike Egurrolla in the drums and Julian Salazar in the guitar. The audience and local specialized press received the album with positive remarks and enormous exposition.

With the launch of “Estalla”, the relation with Nacional Records consolidated even more. The American label decided to release the physical format of the album in the U.S. with the name “Blow Up” and to be launched in July 2009 in New York, where it got excellent press reviews.

Thanks to the support of Polen Records in Colombia and Nacional Records in the U.S., Bomba Estereo managed to enter the international circuit performing in promotional tours in over ten countries, some of them far away form the Colombian territory like Japan, and some others more familiarized with latin sounds such as Brazil and the U.S.

Bomba Estereo was then nominated by the Latin MTV Awards for Best New Artist and was reviewed by newspapers like the New York Times and The Chicago Tribune.

Without a doubt, the single that propelled the musical career of the band was “Fuego”, which was used by McDonalds in their international advertising campaign and in the videogame FIFA 2010.

Early 2010, the band went to the top 10 latin sales through Itunes, just before the international tour of 2010 kicked off, which from March until December, led them to perform in more than 40 cities in Latin America, Asia, Europe, and the U.S. Among the most renowned presentations, the band performed at Sonar in Spain, reviewed for its avant garde sound by Spanish media; sold out concert at the Prospect Park in New York, one of the most important stages in New Yorker's summer; and a show in Expo Shangai in China as representatives for Colombia.

The secod semester of 2010, Bomba Estereo achieved two other international goals: First, the recording of a version of “Pump up the Jam” of Technotronic for the Levi’s Pioneer Sessions. This popular branding initiative invited artists from various countries to create new versions of songs that inspired their sound.

The other international achievement was winning the contest of the Culture Channel and Global Music of MTV for “The Best Band in the World” among 25 other bands from the U.S., England, France, Denmark, Australia, Argentina, Japan, Korea, China, and New Zeland. The award consisted of the recording of a concert for their fans in New York in July.

Back in their country, the career of Bomba Estereo blew up in Colombia, setting a precedent by selling out two dates in a row in the Metro Theatre in Bogota with the band “Systema Solar”. Then followed performances in Europe and Brazil.

Bomba Estereo also won the award for Best Shock Artist in the Shock Music Awards in 2010 as an acknowledgment to their career and their achievements, both national and international. They moved on to perform in the World music Expo – WOMEX- in Copenhague, Denmark in October, an event characterized as an annual appointment for musicians, producers, labels, etc. grouping all products and services of the music industry. During the long history of WOMEX, official records show that the only Colombian artists ever invited have been La 33, Cimarron, Los Aterciopelados, Monica Giraldo, and Petrona Martinez.

After returning to Colombia in November 2010, Bomba Estereo launched the video clip for the song “feelin’”, a visual experiment created by 15 Colombian movie and TV directors. The band then went back on the road to perform their last six international dates of the year in France.

Bomba Estereo ended the year focusing in the composition of the new album and began 2011 with performances in the Colombian Llanos orientales, Peru and two of the most important music festivals in the world: Coachella and Lollapalooza. They also performed in the most important festival in Latin America: Vive Latino in Mexico.

Bomba Estereo is without a doubt the most accomplished independent band to achieve goals by non commercial means.

“Bomba Estereo... is turning plenty of heads with its song "Fuego," the exhilarating lead single from its debut album... playfully referring to both Colombia's burgeoning dance culture and traditional attire in the same breath.”
-BILLBOARD

“Bomba Estéreo is a funky underground talent revealing a genre-busting, linguistics- defying release with “Blow Up”... Lead vocalist Liliana Saumet’s sultry style is a hybridization of Nelly Furtado with the precision and attitude of M.I.A.”
-URB

“[Bomba Estereo’s] album, ‘Blow Up’, quickly threw them on a global map filled with excellent cumbia, champeta, and reggaeton groups. Thus far, they are one of the best.”

“The Bogotá group live up to their explosive moniker with an infectiously danceable sound that often expands into fairly trippy territory.”
-LA WEEKLY

“Nacional Records is famous for taking on unique Latin acts, but Bomba Estereo just may take the cake.”
-KEXP (SEATTLE)

“Natural sounds mix with tensely urban ones on the band’s new CD, “Blow Up”... singer Liliana Saumet delivers the songs in a curt style that carries the force of ace rap.”
-NY DAILY NEWS

“Love the loping cumbia funk of Bomba Estereo's ‘Blow Up’... Yummy groove, excellent for sweat-greased summer booty. Did anyone ever think cumbia would be so cool?”
-MIAMI HERALD

“Pardon the cheesy pun, but Bomba Estereo is blowing shit up... After letting the creative juices simmer abroad, 2009 is the year they finally take over the States.”
-MIAMI NEW TIMES

“Saumet's vocals hold everything together, preventing Bomba Estéreo from sounding like yet another combo wanly mixing tropical styles with club beats. She has a forceful, full-throated attack; she can rap with rhythmic ingenuity, nonchalantly juggling American hip-hop, reggaeton, and dancehall, but she can also sing passionately, nailing melodies with impressive pitch control and emotional snap.”
-CHICAGO READER
Posted by TVR at 5:29 PM