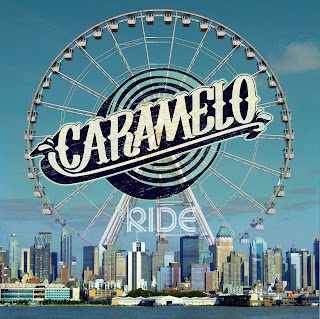 Caramelo is a crew of musicians and flamenco dancers with a shared love of soulful R&B, alt rock, and hot Latin grooves. On their debut Ride, Sara Erde’s sensuous bilingual purr and the gorgeous, gritty voice of flamenco singer Alfonso Cid (“La Luna”) grace the band’s urbane hooks, unexpected instruments, and ear-candy songwriting.
Caramelo revels in a New-World sound and vision for old-school duende, the spirit of expression and energy that drives flamenco at its best. This streets-meets-Sevilla soul will fill Drom on June 2, 2012, as the band celebrates Ride, thanks to special guests from Antibalas, Chicha Libre, and Gregorio Uribe Big Band —and to the band’s funky corps of lithe, vibrant dancers.

06/02/2012, Saturday
New York, NY
RELEASE PARTY @ DROM
85 Avenue A between 5th & 6th
Tix: $10 adv./$15 door, Doors Open: 6:30 pm, Show: 7:30 pm & 9:30 pm
Release Party. Ph: 212.777.1157
Sara Erde was raised in Brooklyn, in a Jewish folk music-loving family surrounded by Spanish-speaking friends, neighbor kids who convinced her to start dancing flamenco early on. She also grew up hanging out with the Cherry family (she rapped in Spanish on Neneh’s Raw Like Sushi) and chilling at reggae clubs. An actress as well as a musician and dancer, Erde often played in off-Broadway shows late into the night, only to show up at high school the next day in pajamas. Her interests eventually converged as Erde began choreographing operas for major companies, including the Met.

Despite years of intensive training and professional performance in flamenco, Erde still felt she had much to learn. So she headed to Sevilla, the heartland of flamenco, and spent six years there, learning how the art form is inseparable from everyday life. Yet Erde never quite felt in her element: “When I put on a flamenco dress, I felt like I was in drag,” Erde laughs. “I had to find a way that felt organic and reconciled all my different artistic loves. I kept wondering how I could make it mine, so I didn’t feel I was playing a role.”

Meanwhile, guitarist Jed Miley was living a parallel life. After the accidental purchase of a flamenco guitar, Miley simultaneously pursued his obsessions with flamenco and with his home town of Seattle’s alt-rock scene. “It grows as an obsession with you. Flamenco is so deep and complicated that you can keep finding new layers,” Miley reflects. “I was drawn to guitar music, then you discover the dancing and singing.” His obsession gained him spots with Seattle-based flamenco companies and soon took him to Sevilla, where he studied guitar with some of the city’s most revered teachers, experience that made Miley an in-demand music director and guitarist in American flamenco circles.

But something was missing.

“I was in Spain and thought, ‘I love flamenco so much, but I have to recognize where I come from,’” Miley notes. “That’s how I got into Caramelo. I’m not a purist, though I love pure flamenco, but I knew I had to integrate all the other interests and influences that I have.”

“In flamenco, people always sing about the neighborhood they are from,” Erde adds. “That authenticity, that sense of place is so important. That’s the starting point for our music.”

When Erde and Miley met in New York, they found they shared a sense of place, a feel for the crossover between flamenco and the city streets, between traditional palos and Spanish dance forms, and NYC club beats and moves. And Brooklyn yielded an embarrassment of potential riches: accordion licks from Eastern Europe and South America (the tangoing “Peligroso”), salsa percussion and horns, Caribbean and vintage funk vibes (“Brooklyn”), and fly-girl moves (“The Girl is Gone”).

Erde and Miley began meeting up, playing around with tracks and lyrics, which came to Erde sometimes in English, sometimes in Spanish. Their collaboration morphed quickly from flamenco-based studio project to something new all together: a pop-friendly yet tradition-inflected live funk band. But with genre-crashing twists: a violinist/female mariachi, a conservatory-trained accordion whiz from Ukraine, a cajón-wielding jazz bassist.

“We have a great rapport on stage, because we’ve been playing flamenco together for so long. There’s a thing about playing this kind of music together: you can anticipate what someone is thinking,” Erde recounts. “And as a choreographer, I felt we could adapt the flamenco model and have dance be an integral part of Caramelo. Flamenco dance is embodiment of the music. We incorporate dance with our music in a similar way.”

Caramelo’s dancers have serious flamenco cred—they’ve learned from the masters and founded their own companies—and share a burning love of old-school club music. They can leap from flamenco to hip hop in a moment’s shimmy.

The diverse yet beautifully sticky whole comes together in the spirit that animates flamenco—and any truly, deeply felt artistic expression. It’s that moment of intensity and perfection that’s hard to name.


“There are so many ways to express that intangible quality, that swing or soul or duende, that little detail about a person that makes them artistically interesting,” explains Caramelo guitarist Jed Miley. “There are these invisible and unique qualities prized in flamenco, and there’s no real way to describe them, but that’s what we strive for.”

“Duende is a force that comes through you if you’re doing art in the right way,” continues Sara Erde, dancer, singer, and songwriter with the group. “That’s what possesses you. That’s what makes people say olé.”
Posted by TVR at 11:57 AM