An interview with David Hidalgo, featured artist for the upcoming 'Border Music' showcase at the Bass Concert Hall on the UT-Austin campus November 30 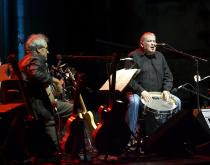 California born and raised, David Hidalgo is best known for his musical history with Los Lobos, but he has multiple side projects including the Latin Playboys, Los Super Seven and Hounddog, just to name a few.

The 'Border Music' show has been performed internationally and now, it is making its U.S. debut in Austin, Texas at the Bass Concert Hall of the UT-Austin campus. I was able to interview David Hidalgo prior to the concert.

We discussed how this performance may be different from those conducted internationally. Hidalgo provided his perspective. "I have been with Los Lobos, Latin Playboys and other sister projects and Marc has different things, as in his work with the Cubanos Postizos. We will draw from it and old Mexican songs, for example, Paquita la del Barrio's song, "Rata de dos Patas." We laughed quite a bit after he said that, as I am familiar with that artist's style and song as it is a popular one. He added, "It will be a fun show." Then in a more serious note, he continued, "We have a loose outline. The band gets together the day before, but it remains loose and improvised. It also depends on how the audience responds. So yes, it will be different from shows in Germany, Italy and others.

I also asked as to what the audience could anticipate from the show. "Tell them to anticipate being surprised," he exclaimed, "as we will be too!" He explained since it is a loose framework for the show that is improvised, then it is like a "jam session. There will be a lot of guitar playing, bass and keyboards from New York, Latin, jazz classics, movie scores."
Speaking of movie scores, we did discuss films and music for film. I told him music is a very important part of a movie for me and how much I enjoy some of the music that accompanies films. "You know, many people overlook that in movies," Hidalgo stated, musing about how soundtracks are amazing. I did inquire about his participation in films with any of his movies. "Yes, and we have been commissioned to to write for films. This year, it was for the film 'Rango' (staring Johnny Depp as the voice of the main character.)"

The talented musician plays a variety of instruments and we started to discuss this. He explained that when he started with Los Lobos, the main instrument is the guitar, but when learning the older Mexican and/or folk music, including learning about mariachi music, he started to learn many other string instruments, patiently listing them all and how they were similar.

As for the accordeon, Hidalgo stated he "stumbled into it," as it was his brother in law that had bought a Horner with the intention of learning to play it during his retirement, "but he passed away. I had the accordeon and his wife gave it to me. I knew I had a purpose and I set out to learn it. I did not see anyone playing it- I learned by ear and learned the wrong way. It is too late now to go back, but I know I will never play like anyone from San Antonio, Texas!"

I tend not to agree with him, and assured him he gives it his own style.

We are in for a big night at the concert!