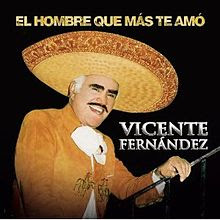 The man who has been singing 'Volver Volver' since it was released in 1976, is on tour and comes through Texas this coming weekend.
He is scheduled to be in San Antonio at the AT&T Center on Friday, September 30th at 8pm, with actress and singer, Edith Marquez, opening up the show.

For many people, this is the man you want to listen to when you want to hear great mariachi music. I never tire and I have been listening to him since back in the day, alongside my mother as we would watch movies on television or at the theater in the Rio Grande Valley.

I have been to his concerts and the one in 2010 lasted 3 hours of non-stop musical entertainment. He does not stop and he wants to make sure his fans are completely satisfied by the time they leave.

Look to see what tickets you can find on http://www.attcenter.com/ and have the time of your life at the concert. His tour will also continue in Houston and Dallas.